Martin led a group up Ben Nevis via Ledge Route and over the Carn Mor Dearg arête. Here's his thoughts on the day... 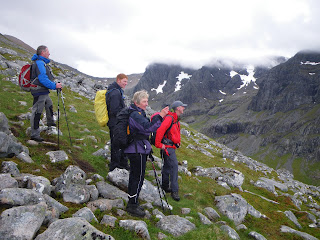 I met Steve, Stuart, Catherine and Brian at the North Face car park at Torlundy outside Fort William. Our route today was to be Ledge route on the north side of Ben Nevis then upto the summit of the Ben and then on to the Carn Mor Dearg arête and back to the carpark.


The forecast was for rain and more rain, however, as the day continued the weather improved and we were given views of this great setting.


We walked at a good pace to the CIC hut and then turned into Coire na Ciste and to the foot of Moonlight Gully Buttress.  From here we crossed Number 5 Gully and upto Ledge Route.  The rain had set in by now but the going under foot was good and we made the summit plateau in great time. We followed the summit plateau rim looking at the famous climbs and the met the hoards heading to the summit by the mountain track. 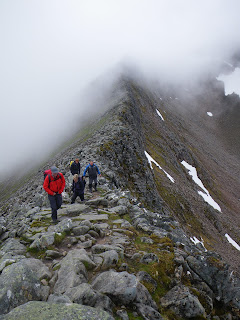 After lunch we over and started the rocky descent down to the CMD.  The weather was improving and gave us good views across to the Mamores and the Aonachs. On our descent we had good views to Ben Nevis and its north face and famous ridges.


Fitness levels were very high today and despite an extended walk from the bottom car-park we managed to complete the day in record speeds and we even saw the sun (almost)!!
More photos are on our Flickr site.